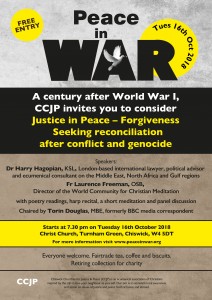 CCJP’s invitation was to an evening of discussion on the continued theme of “Peace in War”. This year’s topic was “Justice in Peace – Forgiveness…Seeking reconciliation after conflict and genocide”.

In 2018, the centenary of the Armistice, as we witness genocide and enforced migration on our television screens, we are reminded of the need for justice, security and peace for all peoples. 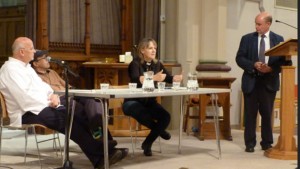 This year’s focus was on reconciliation and forgiveness, a century after WW1
Full article on ChiswickW4

Readings of poetry and prose introduced a range of issues to do with the human approach to war and its impact on us on an individual level and a societal level as well as touching upon the relationship between the two. They dealt with the human causes of war, the tragedy of war and the barriers to forgiveness.

Harry Hagopian’s talk addressed the Armenian genocide, the mass extinction of 1.5 million people between 1915 and 1917, he dealt with the psychology as well as challenges of recognition, justice and reconciliation that persist a century later.

This was followed by a beautiful harp recital by harpist Paula Popa.

After refreshments, Fr Laurence talk addressed justice and forgiveness, the need to break the cycle of violence and how we all needed to look inside our own psyche for the causes of war. He then led a short meditation.

There was then a lively panel discussion for which the main speakers were joined by Revd Martine Oborne.

Local MP, Ruth Cadbury spoke to sum up the poignant themes addressed during the evening.

We were honoured to be joined by Bishop Hovakim, Primate of the Armenian Church in Great Britain and Ireland, who was kind enough to express his appreciation for the event and talked briefly of the importance of recognition of the Armenian genocide.

Simon Rodway, Chair of CJJP brought the evening and the ‘Peace in War’ series of annual events to a close with this prayer of Fr. Naim Stifan Ateek, Anglican Priest, a Palestinian Arab and a Citizen of Israel (former Canon of St George’s Cathedral Jerusalem):

Lord, we pray for the power to be gentle; the strength to be forgiving; the patience to be understanding; and the endurance to accept the consequences of holding to what we believe is right.

We pray for the vision to see and the faith to believe in a world emancipated from violence, a new world where fear shall no longer lead people to commit injustice, nor selfishness make them bring suffering to others.

Help us to devote our whole life and thought and energy to the task of making peace, praying always for the inspiration and the power to fulfil the destiny for which we and all people were created. Amen.

More on past CCJP ‘Peace in War’ events:

2015 – Organ recital in aid of Iraqi Christians in Need (ICIN)