Hope for Peace in an Insecure World

Chiswick Churches for Justice and Peace (CCJP) held a public meeting on 17th October as 4th in its “Peace in War” series on the centenary of the Great War. This year’s theme was ‘Hope for Peace in an Insecure World’. 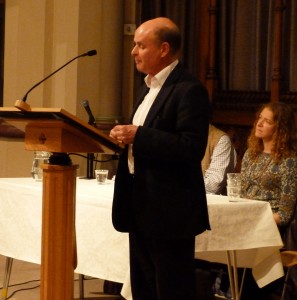 As in the previous year, CCJP were fortunate that Torin Douglas chaired the event, which was held at Christ Church, Turnham Green. The event was opened by Simon Rodway, the Chair of CCJP and a prayer was said by the Curate, Revd. Denis Adide. The event marked the death of Cardinal Cormac Murphy O’Connor who was to have spoken along with journalist and broadcaster, Peter Oborne and Celia McKeon, the coordinator of the Ammerdown Group which last year published a discussion paper, Rethinking Security. The talks by Peter and Celia, were complemented by readings from the Cardinal’s memoires and the 2017 New Year Peace Message of Pope Francis. Over £300 was raised in the retiring collection for the Quaker Social Peace and Witness programme, one of the supporters of the Ammerdown Group. 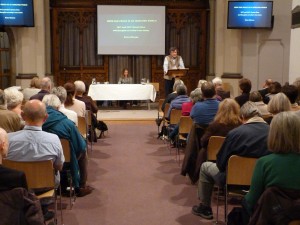 Just back from a week-long visit to Israel and the West Bank, Peter Oborne spoke of the centenary of the Balfour Declaration with Palestinians not being consulted just as the civil rights within the declaration are still not provided.

One hundred years ago the Great War was about a number of empires with their own imperial ambitions who mobilised enormous armies. Today, we have nation states and tribes of groups of people and modern day war is often between modernity and tribalism. This often leads to clashes between modern nation states and external ‘sponsors’ such as the Saudis and the US which is perhaps a kind of empire.

This he illustrated by examples of the Yemen, Rahimyar and the West Bank where he had visited and reported on in the past year. In many cases a form of ethnic cleaning was taking place. He went on to speak of a sort of new reality with stateless people without any rights being subject to hate campaigns. He felt we, in the world, really need to assess what we are now about. 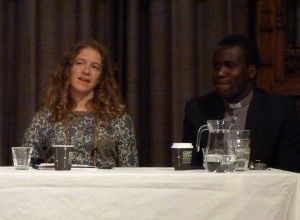 This was followed by Celia McKeon who is the coordinator of the Ammerdown Group which published the discussion paper “Rethinking Security” in May 2016. Examining the popular views of the meaning of “security” and “peace” she spoke of nations such as the UK, when facing today’s complex security threats tend to respond by exerting control. This often means prioritising national security over security of peoples in other parts of the world.

She spoke of the three dimensions of a fresh strategy being: investing in the conditions of security, addressing systematic drivers of insecurity and building of equitable relationships based on justice and mutuality.

There were many examples of other approaches to security, none perfect, but many offering the basis for a much improved approach. Cautioning against expectations of an overnight transformation, a patient approach taking policy approaches far wider than at present would be recommended. 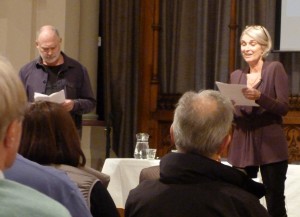 There followed the readings. These included extracts from Cardinal Cormac Murphy O’Connor’s memoirs reflecting his non-violent message and the comment “There will be no peace in our world without justice” alongside moving statements by Pope Francis in his 2017 New Year Message, “Nonviolence: a style of politics for peace” were powerfully read by actors, Clare Byam-Shaw and Ewan Stewart.

Then a lively discussion was held with questions from the audience. The speakers and Denis Adide gave fascinating views on a number of related topics.

After this, Ruth Cadbury, the local MP gave her personal reflections on the evening’s talks.

Finally, the Chair of CCJP thanked all those involved in helping to make the evening a most stimulating and worthwhile one and in particular the Secretary. He added that this was the 14th year that CCJP had addressed many crucial issues and then ended with a prayer.