Chiswick Churches for Justice and Peace (CCJP) held a public meeting on 17th October 2017 as 4th in its “Peace in War” series on the centenary of the Great War. This year’s theme was ‘Hope for Peace in an Insecure World’.

Coordinator of the Ammerdown Group, Celia McKeon was the second speaker. 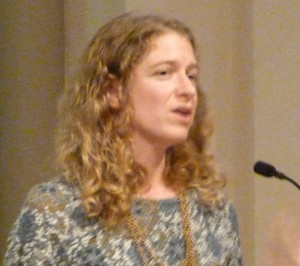 Celia McKeon spoke how as a teenager in the early 1990s, she became friendly with people in Croatia corresponding regularly. However as the war there intensified, the letters dried up with her friend, it turned out, having been displaced to a camp, an experience that Celia said really woke her up. She wondered how it is that our political leaders are so incapable of resolving the differences that led to conflict.

Celia said how experiences of security and insecurity shaped people’s lives. She examined what the words ‘peace’ and ‘security’ really mean and what appear to be the popular views of the differences between peace and security. The UK, a benign state, tends to focus on the symptoms not the causes of insecurity. This often means prioritising national security over security of peoples in other parts of the world.

After the Saudis bombed a funeral, a parliamentary motion arguing for withdrawal of support for the Saudi coalition was defeated with 283 votes against. Hansard recorded that those speaking against the motion argued that the UK would be better placed to be a benign influence on Saudi Arabia, exports supported UK jobs and overall the status quo helped the general fight against terror.

Celia went on to state how security is a freedom and a common right. It can be developed by patient practice and is a shared responsibility. She spoke of the three dimensions of a fresh strategy: being investing in the conditions of security, addressing systematic drivers of insecurity and building of equitable relationships based on justice and mutuality.

There were many examples of other Nations’ approaches to security, none perfect, but many offering the basis for a much improved approach. She cautioned against expectations of an overnight transformation however a patient approach taking policy approaches far wider than at present would provide improvements towards the three dimensions of a fresh strategy.