Chiswick Churches for Justice and Peace (CCJP) held a public meeting on 17th October 2017 as 4th in its “Peace in War” series on the centenary of the Great War. This year’s theme was ‘Hope for Peace in an Insecure World’.

Journalist and broadcaster, Peter Oborne was the first speaker. 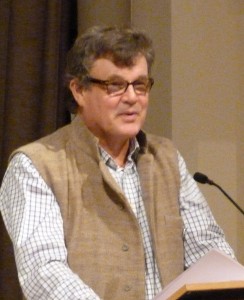 Peter opened by talking about the places he visited in Israel and the West Bank during his just completed week-long visit there. Referring to the centenary of the signing of the Balfour Declaration he remarked how the absence of any contact with the Palestinians in connection with the celebration of this was quite an omission. This seemed a sad reflection of how the Palestinians continue to be let down with the failure to meet the commitment to look after the civil rights of the non-Jewish peoples in Palestine.

He reflected how different conflicts were between then, 1917 and now 2017. One hundred years ago it was about a number of empires with their own imperial ambitions. These empires mobilised enormous armies on the Western Front and elsewhere.

Today, we have nation states, the US is a kind of empire and tribes of groups of people. Modern day war is often between modernity and tribalism. This often leads to clashes between modern nation states and external ‘sponsors’ which he illustrated by examples where he had visited and reported on in the past year.

In the Yemen, the Saudis, an external sponsor of the rebels have been bombing the country remorselessly. In effect an International attack on a remote people.

In Rahimyar, groups of muslins in the country are parked in ghettos or camps in a full campaign that can be described as ethnic cleansing. This can be seen as a sort of pattern of a new reality with stateless people being subject to hate campaign without any rights.

He described the West Bank as quite a harrowing experience. Here again it is getting a form of ethnic cleansing with a systematic attack on the plight of Palestinian People. He spoke of all this been done under the eye of surveillance cameras which are everywhere.

In conclusion he felt we, in the world, really need to assess what we are about.