This event has already taken place, and information about our upcoming event can be found on the Conscience and Choices page.

A century after World War I

A new understanding of peace awakened in meditation 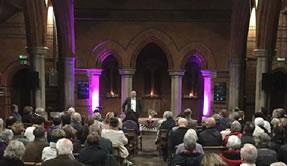 On Monday evening 27th October about 130 people gathered at St Albans Church on Acton Green Common to hear Fr. Laurence Freeman OSB, the Director of The World Community for Christian Meditation, give an outstanding and inspiring talk on “a new understanding of peace awakened in meditation”.

Fr. Laurence is a Benedictine monk who has conducted many peace initiatives and is active in inter-religious dialogue.

Fr. Laurence outlined the complexity of people’s needs for war and how they got an adrenalin rush by going to war.

“Afterwards, however”, he said, “We see the horror of war and the devastation of homes and people”. It is a useless horror which solves nothing and the glory of war is an illusion. Poets like Wilfred Owen and Siegfried Sassoon exposed the fake meaning of war and how soldiers were traumatised for the rest of their lives. He talked about swords being made into ploughshares to become instruments of growth.

To end the cycle of violence, Fr. Laurence said that we have to end false peace. Reconciliation must be lasting and he explained how the Gospel exposed the false peace. War, he said, is a blasphemy against God and religion should be pure.

Fr. Laurence quoted the Sermon on the Mount and talked about forgiveness. One’s love, he said, must be boundless. He went on to talk about the use of contemplation and how meditation is about a radical simplicity, which drives out the root of sin within us. Being with God in meditation brings stillness, silence and stability. Meditation can lead us to loving our enemies and can be a transformative experience.

There was complete silence as the lights were lowered and the candles shone out at St Albans, indicating new hope for attitudes to peace and a re-birth of the Church building on Acton Green. The meditation continued until Fr. Laurence summed up his thoughts. There were then many questions put to him. Everyone had had a truly memorable experience.

The event had been organised by Chiswick Churches for Justice and Peace (CCJP), an ecumenical association of parishes in Chiswick, whose aim is to stimulate local awareness and action on issues of justice and peace. 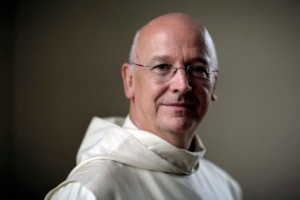 “Practice will show how meditation, within any tradition, becomes a bridge of peace and unity…”

Laurence Freeman OSB [Order of St Benedict], successor to John Main OSB, has been directing The World Community for Christian Meditation since 1992.

“John Main effectively put the desert tradition of prayer to work in our own day. The roots of his distinctive spirituality lie deep in the fourth and fifth centuries, especially in the works of … John Cassian. The World Community for Christian Meditation which continues his mission is for me, as many throughout the world, a taste of what a committedly contemplative church might look and feel like.

The World Centre for Christian Meditation is a contemporary contemplative community. Fr Laurence is Director of Meditatio, its outreach to the wider world and secular institutions.

Chiswick Churches for Justice & Peace is an ecumenical association of parishes in Chiswick joined in the belief that you must love your neighbour as yourself. Our aim has been to stimulate local awareness and action on issues of justice and peace, both at home and abroad.

Work is being done to restore the building. It currently lacks heating; although we hope to have some heating in place, please bring warm clothing if it is cold.

Thanks to Rev Richard Moy and Rev Mike Tufnell of Christ Church, Turnham Green, for allowing CCJP to use St Alban’s for this event.