Approaching 250 people gathered at Our Lady of Grace Parish Centre in Dukes Avenue, Chiswick on the evening of October 20th to hear a series of speakers address ‘conscience and choices’ in conflicts today. This was the 3rd “Peace in War” event linked to the centenary of WW1 organised by Chiswick Churches for Justice and Peace (CCJP). 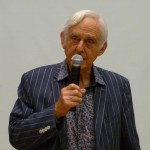 The CCJP Chair, Simon Rodway welcomed everybody and thanked Fr Michael Dunne for allowing us to use the Centre for this event. He introduced Torin Douglas, highlighting the enormous contribution he makes to cultural events in Chiswick, including the Book Festival, and was delighted that Torin was here to chair this meeting. Rageh Omaar, International Affairs Editor for ITV News, began by paying specific tribute to two journalists who had been killed in war zones. He said that one difficulty of reporting wars was the need for journalist neutrality. International reporting was very difficult and he gave the example of Russia Today which would give their own political viewpoint that might not be acceptable to the journalist. The present practice for UK journalists to be ‘embedded’ with the British or American forces, for reasons including safety, inevitably leads to human bonds being formed with forces personnel preparing for military engagement. This can lead to other sides in conflicts doubting the neutrality of the journalists. Other media, such as Al Jazeera emerged as an alternative viewpoint to western reporting which some people in the Middle East perceived as being biased.

The Reverend Deiniol Morgan, Assistant Chaplain at the Royal Military Academy, Sandhurst said how diverse the community at Sandhurst is with many tens of nationalities in training there. He talked about his background in the clergy, his previous posting at Westminster Abbey where he recalled a discussion with a group of schoolchildren about what or who they might be prepared to die for. Most gave the expected response of being willing to die for a parent or close relative but one said he felt there was nothing worth dying for. Military personnel were willing to die for something and recognised they needed to be able to account professionally for their actions. Deiniol throughout spoke of the contradictory elements the armed forces confront and the need to balance them.

David Peppiatt, Red Cross International Director, spoke about the origins of the Red Cross and the challenges it faces; the importance of protecting victims of conflict and the humane treatment of prisoners. He said the key principles of the Red Cross’s neutrality were to ensure access, acceptance, legitimacy and confidence. For example, in Afghanistan, the Taliban allowed access because of their confidence in the Red Cross upholding these principles. He spoke of the recent tragic deaths in Syria of 58, mostly local, volunteers. Aid workers are invariably vetted by the ‘other side’ via searches of social media to validate their neutrality. In Syria, the most pressing task is “winterisation” on account of the severe weather usually experienced in that region. Concluding, he reflected on the Red Cross role in protecting civilians in a world of complex conflicts. This included access to the affected populations, protection of vital infrastructure – hospitals, schools and the protection of humanitarian workers. Above all, we really need to help communities build their resilience.

Patricia Cockrell, peace activist and Quaker, opened by looking back to 1914 and the setting up of the Friends Ambulance Unit during the Great War. By September 1915, the Quakers were appealing to the Government to reject conscription. When in 1916, conscription legislation was passed, they fought to establish exemption for all conscientious objectors not just Quakers. It was not easy for conscientious objectors who faced unsympathetic tribunals and social hostility; at least 80 were known to have died and many suffered breakdowns. She observed that The Great War – World War I – was hoped to be the war to end all wars, but was soon followed by World War II – intended to rid the world of tyrants, but tyranny continues. This century conflict has been justified to combat terrorism but terrorism continues. Peace campaigners’ drive to resolve conflict by peaceful means is brought into greater focus by the relative increase in suffering by non-combatant civilians. During the Great War some 100 years ago 40% of the deaths were civilians. Today, 100 years later, it is often in the region of 90%.

After the interval, Fergal Keane, journalist and BBC TV news foreign correspondent, gave a compassionate account of his experiences in war zones of which he said there were too many. He was encouraged by those who decided that they were not going to kill other people. He read a series of personally selected poems introducing each with a short explanation of his choice. The readings included Haiku poems by 17th century Japanese poet, Basho, Attack by Siegfried Sassoon, Refugee Blues by W H Auden, The Road at My Door by W B Yeats and Ceasefire by Michael Longley.

Next there was a panel discussion with Chair Torin Douglas inviting each of the panel to say what one thing they would do, or request, to address the problems in war torn parts of the world. Amongst suggestions was a plea for more media coverage of positive stories in conflict zones, such as children from opposite sides play happily together. Thereafter Torin invited questions from the audience which covered a range of aspects such as whether the promotion of faith and belief in God could make a more telling contribution to peace? 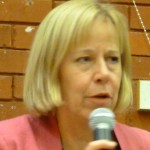 The event was attended by the Ruth Cadbury, MP for Brentford and Isleworth, who said how thought provoking she had found the speakers’ talks and panel discussion. She mentioned that as a Quaker she was a pacifist but could not say she would always vote against going to war in her role as an MP. She cited the Sierra Leone as case where she might have felt military action was appropriate. 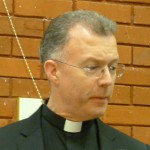 Father Michael ended the meeting with a prayer taken from the Prayer Book used by HM Forces which included specific emphasis on prayer for enemy forces and the need for reconciliation and peace.

Well over £1200 was raised for The Red Cross. Anyone wishing to make a donation to this cause can do so online at www.redcross.org.uk/donate .