More than 60 people gathered at St Michael’s Church, Elmwood Road on October 22nd to hear an enthralling organ recital and see a film of a play performed by St Michael’s Players based on two Chiswick families in WW1. This was the 2nd “Peace in War” event linked to the centenary of WW1 and organised by the Chiswick Churches for Justice and Peace (CCJP).

The Chairman, Simon Rodway, opened the evening by describing the purpose of the event –

He then thanked the Vicar, Martine Oborne for agreeing to the use of the Church for this event and also 2 members of the Church, Steve and Alison Newbold for all the work that had gone into the event.

Martine Oborne explained that “My Darling Boy”, the play shown on screen, was the story of what war meant to a family, their 4 sons and the girlfriend of one of them. It brought home the drastic consequences of “the war to end all wars” on families throughout the country who had no idea what the impact of their patriotism would be.

After the video, Martine spoke about St Michael’s “Heroes of Chiswick” project and similar ones at St Michael and All Angels and St Nicholas Churches. She then read part of an article written by her journalist husband Peter, which described movingly his recent stay in Damascus. 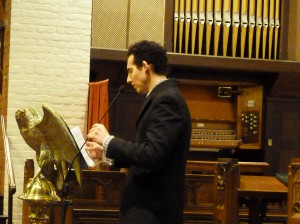 Carl Bahoshy, the son of Iraqi Christians who have lived in this country for many years then gave an organ recital of six pieces, many of which had a Christian theme, ending with a wonderful finale of the 1st Symphony for organ by Louis Vierne. During the music very poignant images of the suffering in Iraq were displayed on the screen, which had a powerful effect. Carl also said a few words about the “Iraqi Christians in Need” charity and read a letter by an Iraqi woman about the situation at the height of the conflict. 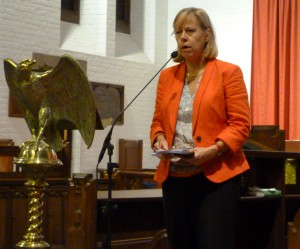 The event was attended by the Hounslow MP, Ruth Cadbury, who expressed her appreciation of Carl’s inspiring recital and asked us all to support the charity. The Vicar ended the meeting in prayer, and Fair Trade refreshments were then served.

Almost £1700 was raised for “Iraqi Christians in Need”. Anyone wishing to make a donation to this cause can do so online at www.icin.org.uk or by mailing a cheque payable to ICIN to 43 Queen’s Drive, Thames Ditton, Surrey, KT7 OTJ.